The city of Manchester can lay claim to be the focal point of dance music’s evolution, just as much as it was the gestation point for punk, and everything that followed.

It was DJs around the city that began importing ‘the sounds of the future’, music created by the increasing availability of drum machines, samplers and sequencers- house from Chicago, techno from Detroit, hi-NRG from Italy– and mixed them together with cheap, plentiful drug supplies to create the dance culture that has carried on to this day. 808 State, an outfit created by the owner and customers of Northern Quarter institution Eastern Bloc Records and named after one of the most prevalent toys of the time, the Roland TR-808, were able to keep ahead of the curve as the sound that would become known as acid house surged in popularity. 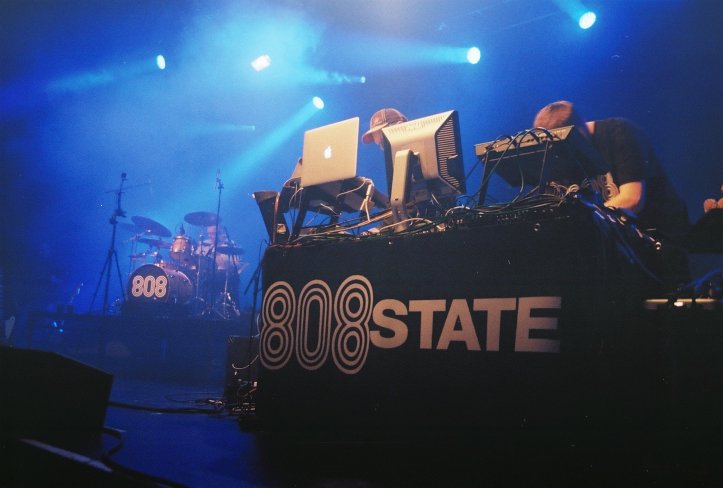 On first thought, the 9pm start for an acid house night on Black-Eye Friday felt like a very intrepid task for someone more indiepop-inclined, but this concern was removed almost immediately as the already-massed crowd gave off a friendly Second Summer Of Love atmosphere. The open, stripped-back layout of the Academy gives the venue an underground, industrial quality- it very nearly feels like a warehouse party as DJs blast out old-school beats and squelching basslines, never dropping the tempo. These warmup DJs, like 808 State, pull from a very specific point in the timeline of dance music- acid house just before the genre skewered off in different directions, either the fairground-ride saccharine incorporating 1970s kid’s TV samples, or the darker, brooding, jungle elements (for reference: go listen to “Pacific State” from the Quadrastate album. It’s pretty easy to picture Chris Waddle, replete with luxurious mullet, working his way around the Cameroonian back four.

Or if you’d prefer, David O’Leary scoring his penalty against Romania. Either way, “Pacific” is very much a musical time capsule that can soundtrack collective cultural memories.) This all being said, there is very much a direct line from early acid house to present day through the likes of Aphex Twin and Autechre on Warp Records– the kind of gear still sold in Eastern Bloc Records to this day.

Lone fades in as the DJs fade out, far more meditative with languid synth pads opening up into a nostalgia-soaked house beat but far more blissed-out, closer to Balearic house than acid. This deliberately vintage sound allowed a smooth-as-silk transition but keeps a sense of continuity and more importantly keeps the dancefloor going, the heavy 4/4 kick only pausing for the occasional Italo-inspired electric-piano break.

This marriage of old-school sensibilities and modern production techniques, analogue emulation on digital hardware has the crowd eating out of Lone‘s hands. The slow build of melodies constantly evolving and changing feels more sophisticated than classic acid house, resembling the type of long-form progressive house found in the Northern Exposure series created by DJs Sasha and John Digweed in the mid-1990s, all the while keeping the unmistakable chirping and gurgling trademarks of acid, catchy earworm tunes welded onto unrelenting jackhammer beats.

Lone‘s DJ set is cleverly set up, moving in and out of his own material with snippets of classic house and techno, including dropping into the acid edit of the legendary “Windowlicker” by Aphex Twin. From there, it’s a build up to the finish- a euphoric wave washing through the venue uniting the crowd in dance as the Balearic feel begins to take hold once again, bringing everything full circle.

The early 1990s are dragged straight into the cutting-edge as 808 State have elected, in a similar manner to Gary Numan some years beforehand, to modernise their sound, utilising live drums and a screeching electric guitar- far closer to industrial rock than the group’s signature sound. This bludgeoning, muscular version of 808 is a modern reimagining of their back catalogue, with a setlist cut from a number of their classic albums. The core trio of Graham Massey, Andrew Barker and touring drummer Carl Sharrocks are occasionally backed by a full brass section, instruments smashing into each other as discordant free-form jazz, tethered together by the powerhouse drumming of Sharrocks (who incidentally was the sole member to visually acknowledge the festive season, decked out in a Griswold family Blackhawks hockey jersey, from National Lampoon’s Christmas Vacation.)

The classic acid squelch is still present, hidden under swathes of noise, showing a tie to the past, but many of the songs are heavily altered- the chilled-out groove of “Pacific” replaced with a pure adrenaline rush, while “Cobra Bora” becomes a monolithic cacophony of heavy brass. It’s clear that the 808 State are having an absolute blast in a live environment in front of an adoring crowd going wild throughout. 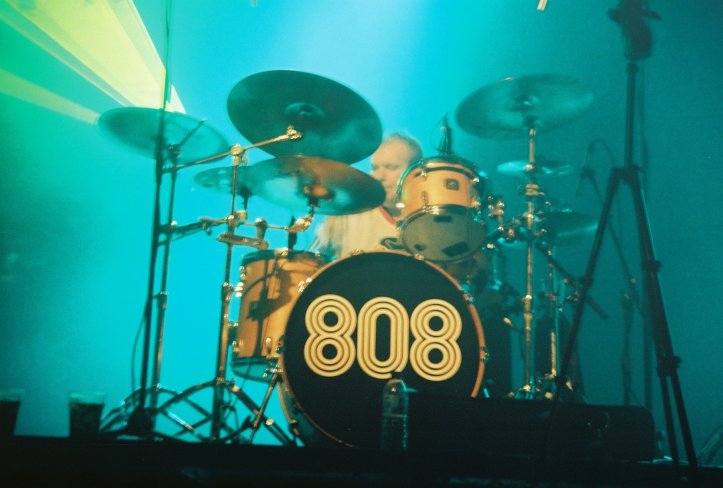 It’s not until you witness frenetic house breakbeats played live on a traditional drum kit do you realise how excessively compex they truly are- Carl Sharrocks plays constantly energised, just as steady but a far cry from the machinery used in their original studios outings. It is this kind of musical rejuvenation that will allow a band like 808 State to move and adapt with the times, both the evolution of the music and also the advances in technology, there was never once any indication that the sounds created by the trio on-stage was 30 years old. That is the true testament of 808 State.

The party continued well into the early hours with the help of Pearson Sound, who like Lone has looked back at the history of acid house and able to craft a sound with equal footing with nods to the eventual development of house, with a DJ set that is able to work immediately following 808 to keep the dancefloor full. Party like it’s 1989.