The local madcap heroes Salt The Snail return to support their latest single “Lazer Quest”, in the best way possible, at an actual game of lazer quest. Pip Johnson reports.

A gig in a Lazer Quest, as mental as it sounds and full of questions like “Will it sound good?” and “Where will the bands actually play?” actually proved to be one hell of a night, the fact that Salt The Snail were at the helm of it probably had something to do with that.

After a quick game of Lazer Quest, which in its self was an event of its own, Mr. Ted took the stage amd got everyone in the mood for the main event. Their set was full of jokes and laughs aswell as pleanty of songs that you can headbang to. While the auidence stayed mostly still this can easily be due to the fact that every one was unsure of whether theyd be allowed to jump about in the main arena of the Lazer Quest, how ever this was all changed when Salt The Snail took the stage.

Promoting their latest single “Lazer Quest” (if it wasnt already obvious by the choice of venue) Salt The Snail brought their infamous salty anticts to a whole new level (literally) Frontman Krystian Hudson quickly threw out the safety briefing which we were given before the game of Lazer Quest we played to start the night of, “No, Running, Jumping, or Climbing” and climbed down from the higher level of the arena while running around during their set and even sitting people up on ledges.

If you’ve ever been to a Salt The Snail show you’ll know the drill, there’s no set order for the set list, instead they write the songs on objects and throw them out at random into the audience meaning the shows are never the same and youll always get a different experience. 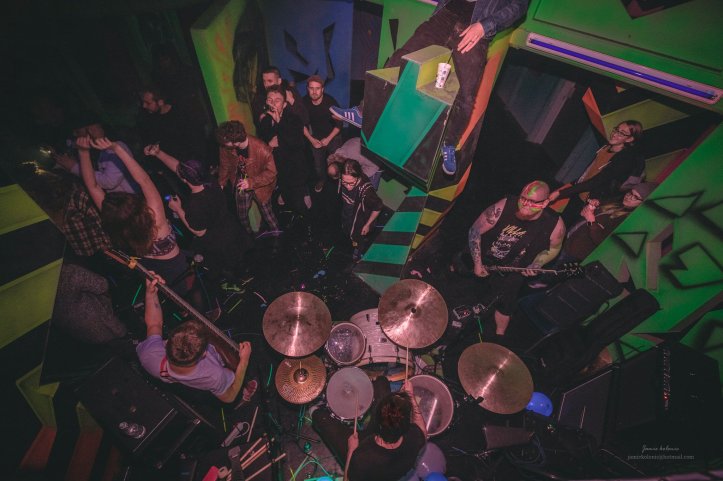 While there were a few technical faults during the set, mainly due to the fact it was held in Lazer Quest, these just added to the uniqueness of the whole night and gave it a true DIY feel. The night ended with an encore which Krystian performed his usual They Live Speech before powering through one final song to end of a truely special and memorable gig.

You can stream and listen to “Lazer Quest” anywhere now, or stream the video below.