Eavesdropping in on the comments of just about everyone in earshot tonight exiting the Academy, leaves no doubt of the impact The Vryll Society are having on the city right now.

With an album that will surely be showing up repeatedly in end of year mag reviews sporting the most iconic sleeve of the year too, The Vryll Society have arrived. They’ve been around a while and those in the know have seen them develop from burgeoning teens to a confident fully formed machine with the potential to keep growing.

A carefully chosen trio of supports tonight also show the band have an awareness of what is good and right outside of their own world.
Lemonade Fix are playing to a quarter of the room when we arrive but are giving it 100%. Most of their songs appear to be based around some element or other of The Beatles’ Revolver, with hurdy gurdy “Tomorrow Never Knows” patterns and uplifting “Good Day Sunshine” hooks. Years ago they would be referred to as a supergroup, these days they are just a top idea, with the combined talents of The Sugarmen, Strange Collective and FUSS. The collective confidence of these band’s former glories might not be quite there yet but the final psychedelic showdown ensures greater things to come.

Deltasonic’s Sunstack Jones appear fully formed with a handful of infectious tunes very much in the model of Howie Payne, particularly in his Stands days. They look boss too, with a guitarist the spitting image of early 70s George Harrison with clothes and stance to match and a bassist in a Shipbuilders T-shirt, nice one.

Standout tunes “Bye the Bye” and “Without Being Told” are so tight with the former tipping more than a nod to The La’s surely with a wink to The Byrds too.

Chatting to a couple of Vryll’s earlier this year it became clear that Skelton Key’s Peach Fuzz are something of a thing in their camp, so a lead support slot was no surprise. It feels like almost as many folks are here for them as for the Vryll Society as the room suddenly appears to burst into life.

Nathaniel Cummings is an enigmatic frontman despite resembling an ever so slightly Thriller era Jacko once the make-up starts to run. Swaddling the here and now with unashamed glam rock moments Peach Fuzz own the stage. New single “Destroy the Evidence” has a lot more guts than its recorded counterpart, and apart from the odd lapse into love song territory the set remains visceral.

The backdrop fills with stars and a blue light drenches the stage as The Vryll Society emerge. Shadow of a wave kicks off the night and vocalist Michael Ellis informs us that they have an album to play tonight. 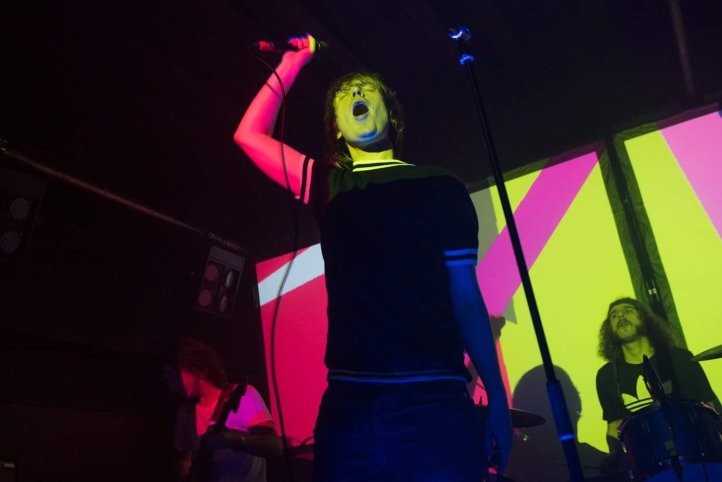 This is the last night of their UK tour and its been their most high profile yet. The band have found an image too through their startling proggy orbs that gaze out from the album cover, and throughout the night those same images form an incredible projected visual experience as the album tracks find new life in a highly polished live format.

Every track is played in a non-linear but perfectly formed setlist, interspersed with older tracks that never fail to hit the mark like “Self Realisation” and “Air“.

Ellis’ voice is like a meditative spirit at times, summery, spacey and sometimes surreal against his mesmerizing movements. At times he appears to mimic Ian Brown with one arm raised, shaking the mic temptingly, elsewhere he is like a rag doll, letting the music completely envelop him. At all times he is completely watchable.

Surefire tracks like “Perfect Rhythm” and “Andrei Rublev” are bound to raise the already euphoric mood but it’s the quieter moments like album closer “Give Into Me” that show the band have more to offer.

“Inner Life” goes beyond the sunshine relief of the album version into something much funkier.

A spot-on encore saves the best till last with a dreamy version of album opener “Course of the Satellite“, so seductive at one point it sounds almost like a Bond theme. “Light at the Edge” is amazing as it should be and its like October never happened.

The set closes with their 2015 single, “Deep Blue Skies” which just brings everything back down to earth ever so gently.

The Vryll Society have evolved into a beautiful butterfly of a band and have provided their hometown with one of the best night’s out imaginable.
As brilliant as this may be there may still be a sense that there are even bigger and better things to come on that wonderful orb filled horizon.