The Wedding Present have, over the space of 30-plus years, become the very definition of cult icons. Always the bridesmaids but never the brides, they emerged in the immediate aftermath of The Smiths‘ tumultuous breakup as the new frontrunners of indiepop, combining heavy-handed jangling guitars with sardonic, matter-of-fact lyrics about love and loss, all perfectly relatable but unlike Morrissey, Lawrence or Edwyn Collins, singer/songwriter David Gedge‘s lyrical style was down-to-earth, straight to the point- infinitely relatable.

Direct but not blunt, angsty but not overwrought. His was the voice of a good friend consoling you over a pint following your nasty breakup, telling it like it is- yes, you might have been wronged but it happened.

S/he’s not coming back, and here we are, we’ll talk it over and hopefully you’ll eventually feel better. A career left-turn saw them move away from their contemporaries- who were beginning to embrace either the Madchester scene or shoegazing (and eventually proto-Britpop)- and turned stateside in their sound, with the grungy, snarling Seamonsters in 1991. Following a hiatus in the mid-1990s and a reformation in 2004, The Wedding Present have become a band with a constant schedule- every year seems to bring both a domestic and international tour, plus recording sessions.

However, the band always seem to be looking through the rear-view mirror, with anniversaries of the releases of older albums taking priority to new material. Credit where credit is due, this tactic has paid off time and time again, and tonight a full Manchester Academy plays hosts to the 30th anniversary of the Tommy compilation album, a selection of early singles that predate debut album George Best.

At this point, I feel the need to point out that I will be going against traditional journalism ethics here, the idea that only objective, unbiased facts should be reported, but The Wedding Present are arguably my favourite band of all-time, and could have literally come on stage in complete silence, stood around doing nothing for an hour and left without a word, and even then I’d defend their artistic decision.

Support for The Wedding Present came in the form of Desperate Journalist, the London outfit are no strangers to Manchester having played in the area several times over the past couple of years either supporting larger acts or touring outright, and here they are continuing their ascent, growing in confidence as well as fanbase- numerous Desperate Journalist t-shirts could be seen in the crowd.

Clad in monochrome (with the exception of drummer Caroline Helbert’s bright red hair), Desperate Journalist are a monolithic slab of gloom, with their claustrophobic, pulverising intensity brought about with effect-laden 12-string guitar reminiscent of early Echo & The Bunnymen records, spiralling in on itself into the ether. The style is a natural evolution of the post-punk of the late-1970s north-west, with stunning frontwoman Jo Bevan‘s voice piercing through the wall of sound like a lighthouse shining through dense fog, “Why Are You So Boring?” and “It Gets Better” made larger-than-life with anthemic, soaring vocals, all the while underpinned by tight, hard-hitting bass and drums. In terms of song matter, Desperate Journalist are not far removed from The Wedding Present, but instead of pent-up anger, this foursome are coldly staring into the abyss with a defiant smirk. The mire built up over the course of the set is burst open at long last with “Resolution“, the band sonically tearing apart their inward-looking gloom with carefully-measured rage. Desperate Journalist are a band fully in ascension- the only question is how high will they reach.

The Wedding Present take stage to rapturous response as they open with Seamonsters cut “Heather“, a gut-wrenching account of unrequited love and I’M NOT CRYING, YOU’RE CRYING! IT’S NOT TEARS, IT’S BECAUSE I’M ALLERGIC TO JERKS!…sorry. Gut reaction there. The quiet-verse/loud-chorus fuzzed-out guitar of both “Heather” and Bizarro deep-cut “Don’t Talk Just Kiss” betrays the band’s partnership with producer Steve Albini and their move towards the burgeoning alt-rock scene of the early 1990s. The Wedding Present‘s longevity may be thanks to the revolving-door lineup surrounding David Gedge, and the band’s current setup is certainly one of the most muscular (drummer Charles Layton, in particular), hurtling through material old and new- two new songs are given a run out: “Jump In, The Water’s Fine“, an offkilter thing that could have been a feature by a band in the Twin Peaks Roadhouse (apt, as The Wedding Present released a cover of “Falling“, the theme from the show), while “Panama“, with polyrhythmic clapping intro, is more cinematic in scope, closer in spirit to Gedge‘s Cinerama project.

Rather than playing straight through, songs from Tommy is sprinkled across the band’s set, the first of which, “Go Out And Get ‘Em, Boy!” is announced via the disembodied voice of John Peel, a lovely tribute to the man who championed the band throughout their formative years and beyond. The Fall-by-way-of-Velvet Underground spiky jangle still as potent today as three decades ago, as a trifecta of early records sit seamlessly with the grungy, snarling “Lovenest” and “You Jane“, one of the highlights from 2012’s Valentina. The crowd, in incredible high spirits throughout, are a non-stop mass of energy, singing and shouting every word back to the band, even at times outmatching the volume from the stage.

One of the early career highpoints for The Wedding Present, in actuality cementing their name in indiepop immortality- was featuring on the now-legendary C86 cassette produced by the NME, which also featured songs by Primal Scream, The Pastels and McCarthy, over time leading to its reputation as the Nuggets of mid-1980s UK indie. The Wedding Present‘s “This Boy Can Wait“, the final track on the album, benefits much like the rest of the Tommy-era material from a far stronger backline, rather than the treble-heavy original recording- last year Gedge and co. revisited their debut album George Best along with longtime collaborator Steve Albini to re-record the album in it’s entirety. Perhaps a similar experiment could be done to the Tommy songs to closer resemble the current band’s more forceful style?

“This is a William Shatner number” introduces a cover of “Felicity“, originally by post-punk pioneers Orange Juice a long-running in-joke from the band, stemming from the guitarist from the Glaswegian outfit, a man named James Kirk. This is followed up with “You Should Always Keep In Touch With Your Friends” and “Never Said” another brace of Tommy-era tracks than benefit greatly from the band’s current style, with Gedge‘s trademark everyman storytelling of relationship breakups and breakdowns, pleas of desperation and despair that read like internal monologues or private diary entries brought to life. 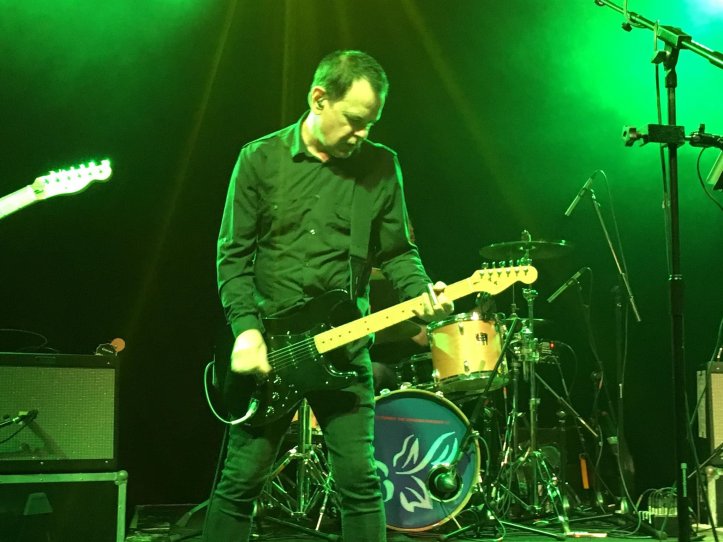 Forgoing an encore (a band tradition), the final two songs are arguably the two biggest hits of the band’s career. “My Favourite Dress” is a tale of barely-concealed anger, jealousy, lost love and an attempt at romantic closure- or lack thereof- over a simple, choppy two-chord figure. Again, it’s the accessibility and relatability of The Wedding Present‘s songs that have made them timeless. We all get hurt.

We all get let down. Nearly everyone will get their heart broken at least once. Sometimes we aren’t able to come away with the satisfaction of the ending we’d want, or even any ending at all. All we can do is try and come to terms and attempt to move on, to start again…but all it takes is the smallest trigger, the most inconsequential event to remind you, d before you realise, you’re back to the start of the whole process again. It takes a lot of time and energy to heal. Thankfully, the lyrical heaviness is removed entirely for final song ‘Kennedy’, an indiepop classic which has the entirety of the room singing and jumping en masse in complete unrestrained delight. The perfect way to end a Friday evening in the company of these cut heroes. “A rare delight in Manchester town” indeed.