The Men-in-Black return for their yearly visit to Liverpool with a hit-filled set at the O2 Academy, this time with guests Therapy?.

It’s a Tuesday night, it’s cold outside and Liverpool FC play a Champion’s League game, yet the O2 Academy is packed with fans waiting for the legendary Stranglers.

Many moons ago, The Stranglers were one of the biggest acts in the UK, and rightly so, with their overtly different punk sound and their dangerous edge (see: Reading Festival).

The night opens with Irish alt-metal pioneers Therapy?, bringing their harsh built sound that puts the balls to the wall.

Therapy? have always been unique, their lyrics and sound mesh together so perfectly, like a band that maturely doesn’t give a fuck.

Pounding out shots like “Teethgrinder“, “Screamanger” and of course the classic that is “Potato Junkie“. Therapy? also return to play Liverpool for Feis Festival in June.

Say what you will, tonight ultimately proves that bands like Therapy? and The Stranglers are still in-the-game.

The Stranglers preform like a dream, a tight-knit, quartet of black-cladded thrillseekers, they’re on their ‘A game.

There’s a lot in The Stranglers‘ catalogue and it’s visable how stained their audience actually is. There’s a big number who love their new wave sound, the obvious “Golden Brown” type, while the majority are here for the sheer attack. 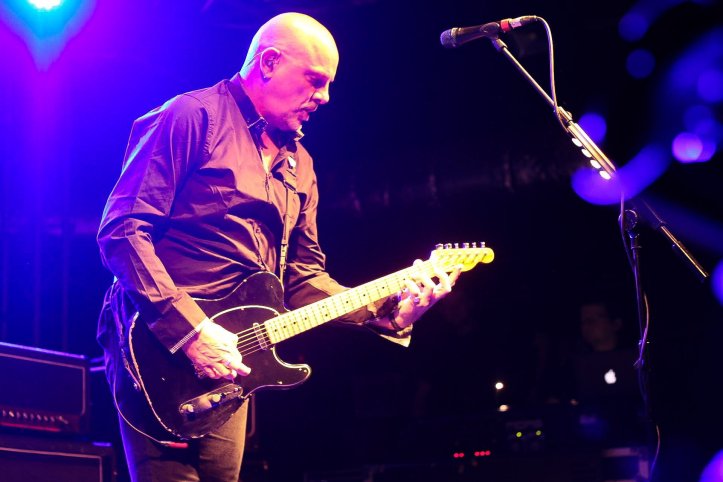 The band walk on to “Waltzinblack” and they’re ready. They to play to both crowds tonight, with strength. Early showings of the hits “Peaches“, “Always The Sun” and “Golden Brown” actually allow the casuals to go, and a good few do.

But if you stayed, you were in for a show. “Nuclear Device“, “Freedom Is Insane“, “Just Like Nothing on Earth“, “Tank” are all definitely highlights in their own right.

Their encore is the main highlight of tonight, a quick turnaround from the main portion and they come back with “Nice n’ Sleezy“, before bassist Jean-Jacques Burnel shows off his power with a teasing bass solo before hitting us with their final song of the night, “No More Heroes” which gives us one last chance to cause a ruckus.

In the end, if you saw them forty years ago, or you saw them tonight, The Stranglers are still a must-see entity and armed with their diverse, classic catalogue, there’s very few better.