35 years in the game, synth-pop icons Erasure have never left and their constant, somehow always relevant sound, alongside a marathon set and the dynamic Andy Bell, makes tonight’s show a smash.

Opening the night were Welsh electronic band Bright Light Bright Light, who if they had been dueling during the same age as Erasure and their counterparts, would have been another synth-pop king.

However, their modern tropical electronic numbers brought a fresh feel to the genre. Their frontman, Rod Thomas, obviously is in debt to Erasure‘s Andy Bell with his entire persona, however the mirror image is only visable for so-long until Bright Light x2 shine with their catalogue.

After only twenty minutes break, we’re treated to the one and only Erasure in what must be, and later confirmed, third show in Liverpool.

There’s virtually no opening hype, rather a quick dive into “The Theme From Tales From The Unexpected“, with Bell‘s backing singers arriving within lighttube picture frames. They follow-up with the song that gets the crowd instantly into their show, “L’amour“, with Bell straddling a chair to massive uproar. He’s an icon, most definitely.

Their asthetic and set-up is absolutely gorgeous.

It’s a constant discussion about how long should an act play for at their own show, and it’s based upon many factors. Catalogue against age is a main-point, however tonight Erasure crank out 25 hits in a non-stop almost two hour set.

With early appearances of “Ship of Fools“, “Chains of Love“, “I Love Saturday“, which were all tight highlights, Erasure feel at home.

Bell roaming the stage with utmost charisma, and the other half of the duo Vince Clarke perched above on a balcony, which with it’s Romeo & Juliet-esque appearance, definitely adds to Erasure‘s romanticism.

The band kicks it further after their 14th song of the night, off their latest effort of the same name, “World Be Gone“.

“Take It Out of Myself“, “Who Needs Love Like That” and “Blue Savannah” keep the crowd on their feet, especially those who chose to ignore their seats and adore Bell at the front.

Earlier in the night, Bell spoke about not playing Liverpool often “how do you entertain Liverpool? It’s in your blood”, he says before dismissing a Beatles cover. “We have a one cover a show rule”, he says and later confirms with their excellent dance-cover of Blondie‘s “Atomic“, which gets everyone moving.

“Drama!” follows and brings us to our seats, Erasure are excellent with their mood-swinging setlist, and add further proof following up with highlight “Stop!” and everyone has their moves sussed.

Final numbers show-off “Always” and finally “Sometimes” before Erasure leave with a standing ovation. It’s extremely clear what everybody is waiting for, definitely not twenty-five more songs, but simply one more.

The simple, everlasting, pop-standard that is “A Little Respect“. If there is a book of pop classics, this is on the first page, and is perfect enough to bring Vince down from his perch with an acoustic guitar attached.

It’s one last dance party, the stage flashing with rainbow colours and the crowd utterly adoring every move of Andy Bell. It’s an anthem of love, mercy, equality and most of all, Erasure. 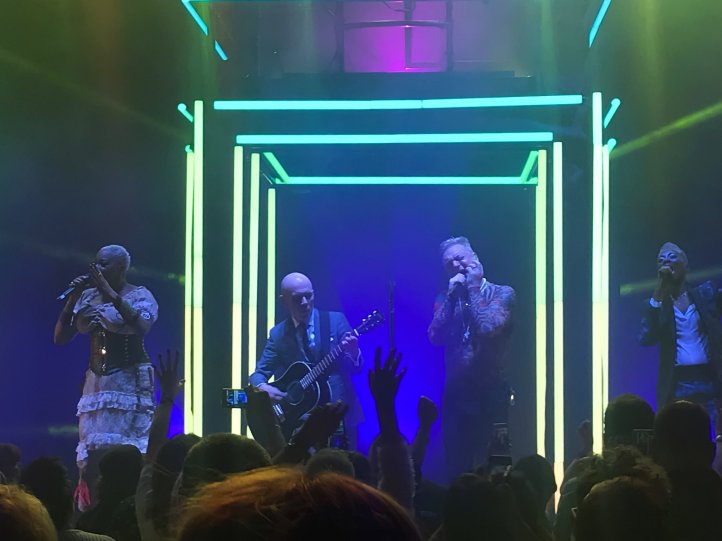