The start of February 2018 has proven to be a rather special time in term of astrology, with a Super Blue Blood Moon hanging in the sky. There are all manner of extraordinary implications within this phenomena that resonates strongly in psychedelia, everything from witchcraft through to astral projection- and the aptly named Moon Duo lend themselves perfectly with their inimitable style of electronic psych-rock. 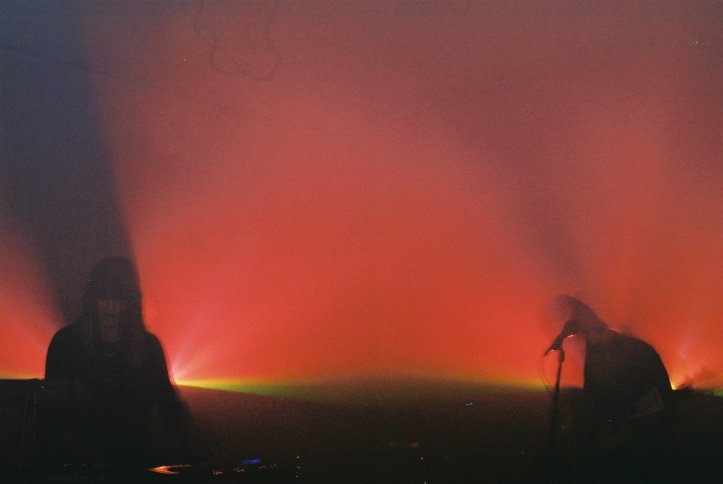 It was been roughly 12 months since Moon Duo last played Manchester in that time, they have released the second part of their double album set, Occult Architecture, Volume 2, the continuation of their experiment in duality, a hallucinogenic journey from dark into light.

In lieu of support, the ambience required for the night was supplied by DJ Jeff O’Toole, supplying spaced-out grooves to the rapidly-filling room, the limited space made infinite through harsh red lights and a thick unrelenting cloud of smoke. O’Toole’s selection are a crate-digger’s delight- hypnotic, blissed-out cuts, exactly halfway between continental lounge and shoegaze, with the occasional menacing drone, ominous chant or South Asian-inspired melody thrown in for good measure. The overall effect was quite disorientating, a mixture of the Black Lodge from Twin Peaks and the temple from Apocalypse Now.

The lights dim. A triad of silhouettes appear through the fog. Moon Duo burst into life with ‘The Death Set’, Occult Architecture, Volume 1’s opener- hard-hitting motorik underneath two-chord garage rock as the light show begins. The band are completely backlit, remaining as silhouettes as an intense wash of kaleidoscopic colour pierce through the smoke, giving an effect not unlike 2001: A Space Odyssey’s stargate.

More material from Occult Architecture, Volume 1 follows “Cross-Town Fade” in particular is positively bristling with energy, even morse than the studio recording. With the solid groundwork created through John Jeffrey’s powerful and precise drumwork and all manner of pulsating drones and riffing synths from Sanae Yamada, guitarist Ripley Johnson is able to break out from the songs a little more, however, while occasionally freeform, the music never feels self-indulgent, songs stretching out for lightyears but still tethered by their bounds.

Moon Duo are an outfit who know each other, and naturally their material, inside-out, able to hold their sonic force together tightly, and almost preternaturally know when- and how- to extend jams out during songs.

The difference between the first and second Occult Architecture albums, light and dark, claustrophobic and opened up, can be felt in a live environment. In contrast to the menacing propulsion of “The Death Set“, “Sevens” breezed by, like a weight lifted from the collective shoulders of both the band and the audience. While very futuristic and forward-thinking, Moon Duo have a considerable debt to the past, and they paid tribute to two of their influences in cover versions of “Jukebox Babe” by Alan Vega, and The Stooges’ “No Fun“, the formers’ paranoid, skittish rockabilly riff transformed into muscular swagger, while the latter’s protopunk call-to-arms becomes a sludgy, trashy singalong, spiralling out of control as the effects-laden wall of guitars crash in on themselves into nothing more than a flatline. The cascading lights stop. The smoke begins to clear. Moon Duo have vanished into the ether.