The annual award-winning Liverpool Music Week has officially been announced for its 15th year with an already amazing first wave of acts including this year’s openers, CHIC & Nile Rodgers.

This year’s Liverpool Music Week has already set a bar to be the best yet with its first wave of acts which were announced earlier today. The disco-funk legends CHIC featuring the iconic Nile Rodgers will officially open this year’s festival with a huge date at the Liverpool Echo Arena on 26th October 2017. 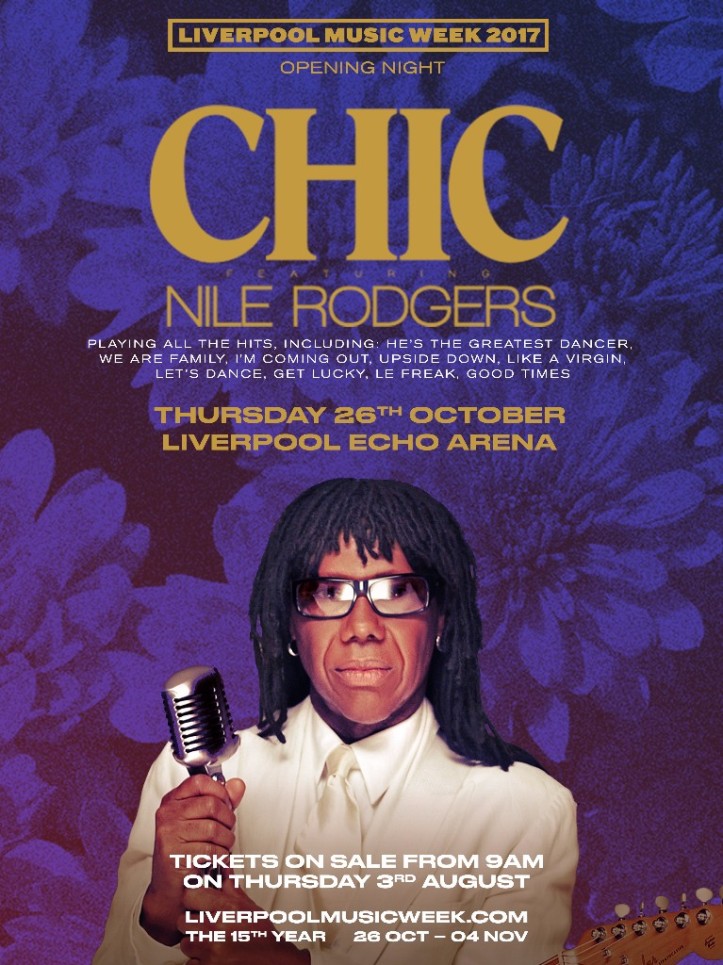 With the announcement Festival Director Mike Deane has said: “It’s been quite the journey since starting Liverpool Music Week as a single venue venture back in 2003, but there’s no doubt that today is our single proudest moment as we announce CHIC & Nile Rodgers as our 2017 headliners. There aren’t many individuals in music who compare to their legendary status, importance, and continued iconic relevance. We are utterly thrilled that both Nile and the band have agreed to join us this year. There really isn’t a live music show quite like CHIC, and we can’t think of anyone better to open this milestone year.“

The following night will see electronic duo Mount Kimbie step into the Invisible Wind Factory for an anticipated show, supporting their third album What Love Survives which is due out September 8th on Warp Records.

Motown loving indie-poppers Childhood will bring their sounds to the Buyers Club, while Gangahr will bring their psych-pop to the Magnet. Meanwhile, important New York-based alternative hip-hop act Princess Nokia will play LMW2017 with an exclusive UK date outside of London.

On the final day of LMW2017, the closing party will return this time placed on all three floors of the Guild of Students at Mountford Hall with the first wave of closers including grime MC AJ Tracey, stunning critically acclaimed alt-pop act Perfume Genius will make his Liverpool debut and Zola Jesus will return for the first time in six years, backing her upcoming album Okovi.

Liverpool Music Week will also bring Bella Union‘s 20th-anniversary celebrations to Liverpool with a special show at the Leaf on Bold Street including performances from Lost Horizons, the new live project of Cocteau Twins‘ Simon Raymonde along with more acts to be announced.

Furthermore, the LMW/DIY Breaking Out series will return to its new home at EBGBs with a big bill already featuring shows from Goat Girl, Girl Ray, Spinning Coin and Little Cub.

Individual show tickets, including tickets for the CHIC & Nile Rodgers show, and full wristband tickets will be on-sale on August 3rd here.