For a weekend full of space, science, brilliant music and pure imagination, Sounds From Nowhere delved into the world of Bluedot for its 2017 festival.

It’s only the second year for the wonderous Bluedot Festival, based out of Jodrell Bank Observatory in Cheshire, where astronomy and music collide and we excitingly set off to enjoy the weekend.

The first band we caught while on site Friday, after arriving and setting up our camping, we’re the exciting semi-fictional rockers The Moonlandingz. Their outlandish performance kicked off our weekend in style, with the band on fine form.

However, less of their blurred fun stage antics was a bit of a letdown. The band have made a name for their twisted shows, yet their Bluedot set was tame compared.


Halfway through their set, leader Johnny Rocket exclaimed “you lot fucking off to see Leftfield yet? I don’t blame you, we’re here for the money” in his sarcastic manner, however that only reminded us.

Over in the packed Orbit Stage tent, the iconic electronic band took stage for possibly the most anticipated performance of the weekend.

The band preformed a pummelling set filled with classics from their era, of course including the likes of “Release The Pressure“, “Space Shanty” and others with an hour and a half of pure electronic mastery.

After reuniting seven years ago without founding member Paul Daley, their current line-up fearing originals and Hadouken!’s Nick Rice, certiently won’t be running out of steam or hype anytime soon. That’s not bad for a band who peaked over two decades ago.

The night time began drawing in, we waltzed around the absolutely beautiful Jodrell Bank Observatory site, which is a heavenly place for a festival like Bluedot. With DJ sets and bands preforming everywhere, the atmosphere was electric, even in the Contact tent where they showed the most recent Star Wars film, Rogue One.

We reached the main stage to witness the opening headline performance of the weekend by the iconic Pixies.

The band struck quickly with opening number “Gouge Away“, instantly proving their power especially with follow-up “Debaser“. Pixies are a band who have been around so long that it’s now effortless to amaze.

The band’s setlist encompassed almost all of their work, from Surfer Rosa to Head Carrier with frontman Francis Black making up the setlist on the spot, creating one hell of a performance.

Highlights included appearances of “Monkey Gone to Heaven“, “Here Comes Your Man“, “Where Is My Mind?“, a cover of The Jesus and Mary Chain‘s “Head On” and a late appearance of “Crackity Jones“.


Their encore included a masterful exit, as smoke machines engulf the sky and cover the stage, the band ends with “Into The White“. The disappearing trick by one of the most important bands ever.

Following this, we decided to end our night with something to eat and by watching the showing of 1997 classic Contact in the Contact Tent.

Early rise on Saturday allowed us time to pot around the site, admiring all that was offered by Bluedot. Over at the Orbit Stage, we caught our first act after 1pm in Horsebeach. The band preformed just half an hour of their indie-pop sounds similar to their Sound City set in May.

Shortly after on the main stage, Post War Glamour Girls confidently take to the stage with their powerful rock full of attitude and angst, in the best way.

Over in the Nebula Tent, new Manchester act W.H Lung brought their fresh hypnotic sound to Bluedot. For a half and hour, the band showcased their rhythmic noise to a great crowd.

Following them in the same space, the dynamic London band Virginia Wing bring their throbbing, glitchy vibrations to a tiny crowd. Becoming one of the weekend’s most underrated acts, the electronic duo push the boundaries of pop further than we’ve seen.

Over on the main stage, upbeat electro pop artist Shura brings her stunning live set to the weeeknd. From opening with her brilliant track “Nothing’s Real” to joking about feeling like Jane Fonda in Contact, Shura captured the crowd in the palm of her hand.

Shura has always pushed the stereotypes of pop since day one and has done it with pure refined beats and passionate lyrics while her live set shows are no different. 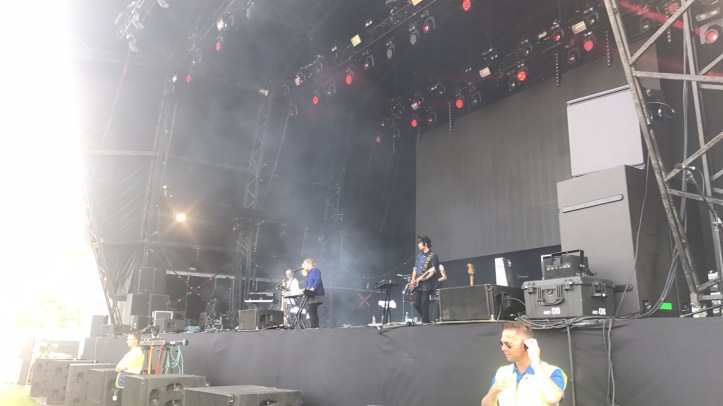 Down at the lovely Roots Stage, Howling Bells‘ frontwoman Juanita Stein plays her lucid songwriting to a small, relaxed audience. While her solo work is fresh, Juanita has been on the live circuit for over a decade and confidently performs.

Juanita‘s set intimately saw her preform the entirety of her upcoming debut album and what a blissful performance it was.

While after on the main Lovell Stage, the Saturday headliners Orbital take stage. The return of the symphonic electronic legends attempts to live up to the hype with a set filled with the band’s textured hits.

Shining bright with dance classics such as “Wonky“, “Halycon” and “Belfast“, the brothers bring a sincerely special performance to Bluedot, especially with main set ender, their adoring tribute to the ultimate British sci-if show “Doctor?” with guests The Radiophonic Workshop.

Their magical performance got better with the triple headed encore of “The Box“, “Chime” and finally “Where Is It Going?“, proving Orbital may have been the best headliner for this night.

It’s not over however, at the Nebula Stage, the ever-brilliant Dream Wife appear in the best form we’ve seen from them, striking with the best songs in their young catalogue and collectively shining more brightly than ever. Their brand of dreamy punk rock is simply intoxicating and a wonder to see live time-and-time again.

To end Saturday night, we rush to the Orbit tent to experience Soulwax in their glory. Their modern set-up, appreciating drums and machinery, is a bold hypnotising wonder that needs to be seen to be believed.

The lights slam up as the stage hands reveal Soulwax‘s three drummers as they smash into “Do You Want To Get Into Trouble?” and the crowd erupts into a pleasurable euphoria of sweat, driven with a loud dancing crowd.

The band’s set is invigorating, the highlight may be the newest material by the band much like the throbbing “Missing Wires“, “Conditions of a Shared Belief” among others that took up most of the setlist.

Soulwax tore Bluedot apart with their mesmerising set, the highlight of the weekend indefinitely, especially ending with “NY Excuse“.

Sunday began very slow, everybody recovering from the wonderous night before.

Later on Sunday, The Whyte Horses Experience took to the Lovell Stage to show their unique psychedelic-pop sounds that made them one of the most perfect, newer pop bands on the planet.

Their Exploding Plastic Inevitable inspired performance sees the fascinating Mancunian band joined by Josefin Ohrn along with members of both Badly Drawn Boy and The Go Team.

Following the experience, we see the always amazing Warpaint take centre stage, treating Cheshire to an hour of their best material, mostly led by their latest album.

The crowd adored their set, especially with the final appearance of “New Song” to close the set.

Instead of stopping at the main stage for Alt-J, we took a brash decision to catch the legendary Hawkwind instead, sorry.

The band tightly showcase their legendary brand of psychedelic prog-rock with a crowd of Hawkwind fans and only some newbies, it seems that most only bought a ticket for Hawkwind itself.

Their set included some of the band’s best material, “Vegan Lunch“, “Steppenwolf” and “Into The Woods” but due to a very short stage time, the hits were missing.

Hawkwind surely are brilliant and are still a powerful live entity, but just forty minutes is far too short to hear the likes of “Silver Machine“, “Master of The Universe” or even “Brainbox Pollution“.

That’s the end of our weekend, Bluedot is surly the grandest, most pleasent festival we’ve been to and simply can’t wait for next year’s. 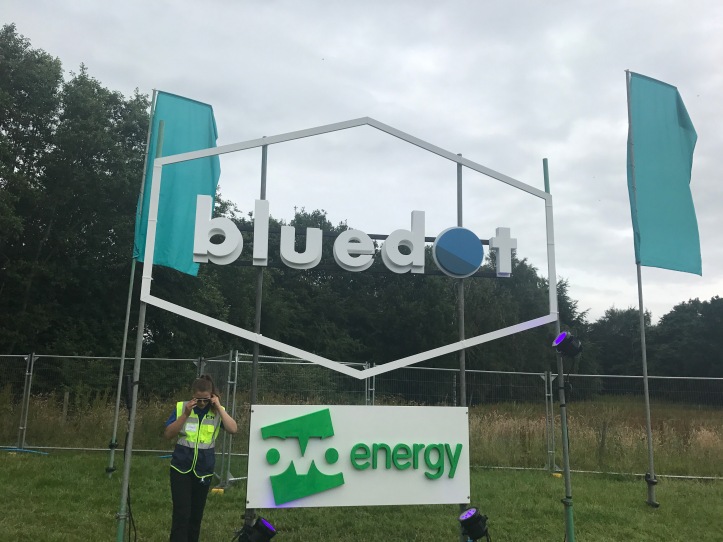