Last night, iconic metal legends Iron Maiden made their return to Liverpool after almost 27 years for a heavily anticipated show. Shaun Ponsonby went down to catch Maiden in action.

It has been a long time since Iron Maiden played Liverpool – a fact referenced by frontman Bruce Dickinson on stage. By our calculations, Eddie hasn’t graced a scouse stage since 1990’s No Prayer For The Dying Tour, so to say tonight’s gig is anticipated is a bit of an understatement.

Maiden fans are among the most loyal in the world. Lame-oid hipster doofuses tell you that you shouldn’t go to a gig wearing the band’s t-shirts. But for Maiden fans it’s like a uniform, a badge of honour. It feels almost mandatory. They know everything down to the pre-show ritual, and as soon as the opening notes of UFO’s live version of “Doctor Doctor” blasts through the arena, the ripples of excitement in the crowd are palpable.

The effect of this is that the band is that they can pretty much go anywhere and the audience will follow them. A Maiden show is not a place to go if you want a nostalgic blast from the past, and tonight’s setlist reflects Iron Maiden 2017, not Iron Maiden 1982. They play over half of the songs from their current double album The Book of Souls, including the opening duo of “If Eternity Should Fail” and “Speed of Light”.

When the band did drop the big hitters, be it “The Trooper”, “Wrathchild” or “Fear of The Dark”, the crowd erupts with joy, singing along to the lyrics and the guitar solos.

There is a huge juxtaposition between the material from “The Book of Souls” and the earlier favourites. The short, sharp attacks of earlier tracks like Iron Maiden were clearly written in an era where punk reigned supreme. Over their career, though, the band have indulged in their prog rock influences, culminating in the 20-minute epic “Empire of the Cloud”  on “The Book of Souls”.

The two styles shouldn’t necessarily sit together comfortably, but somehow it works, and it probably lies in the band’s showmanship. Dickinson remains a force of nature, galloping around the stage like a man half his age. Guitarist Janick Gers isn’t far behind, and there was something of a back and forth between the two of them throughout the show. Almost as if Gers was Dickinson’s foil at times.

When Eddie – the band’s mascot, more recognisable than most of the individual band members – appeared during “The Book of Souls”, he seemed to get involved in this by first attacking Gers and then Dickinson, before disappearing into the distance.

There is a reason Maiden have remained one of Britain’s biggest bands. The energy of the six-some is hard to surpass, and they still play with the same passion they played with in 1982. You will be hard pressed to find a band with a more dedicated following, confidence in their material, a more theatrical stage show and sense of humour. Fans travelled to tonight’s show from all over the world; there were people from Sweden, Texas, Norway all brandishing their own country’s flags in a show of solidarity with Eddie and the boys. 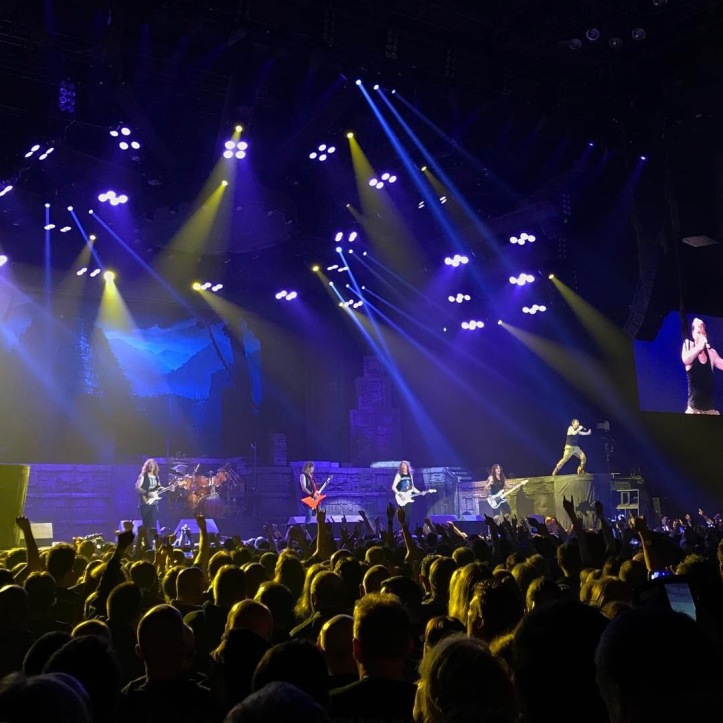 And yet they still feel like perennial outsiders. If some dull British indie band were as big as Maiden, the cultural elite would be queueing up to celebrate them. They have sold bucket loads more than, say, New Order or Blur and have been just as influential in metal as those bands have in indie.

Why is this? Maybe it is because it’s all quite bloody ridiculous. But they know how ridiculous it is. Dickinson in particular seems to get that aspect of the band, and at one point was bouncing around the stage wearing a monkey mask and getting Adrian Smith to play his guitar with a banana.

In contrast, openers Shinedown are equally as choreographed and ridiculous but without the knowingness to really pull it off. Faux impassioned speeches from frontman Brent Smith about how we are at the “Metal event of 2017” made this writer cringe. That said they went down well with crowd, no mean fete for a Maiden support (I recall Trivium getting heckled in that slot a few years ago), so maybe the shtick works better than I would have thought.

Still, they played well and the things I thought wouldn’t go down well, did. So maybe I should quit this music writing malarkey and become a milkman.