Liverpool Music Week 2016 is almost upon us and it’s looking tremendous, from the amazing headline shows featuring all-girl Californian band Warpaint, “The Master of Horror” John Carptenter and Dinosaur Jr. to the newly announced returning DIY Breaking Out shows with the likes of Amber Arcades, Lets Eat Grandma, The Big Moon and more. It’s looking to be the highlight of the year, and what a year it’s been. 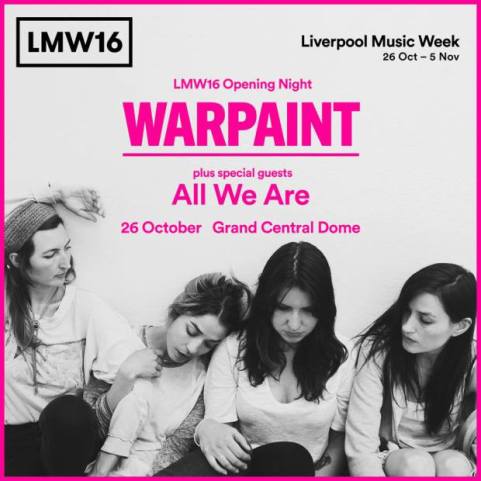 Liverpool Music Week begins October 26th 2016 with the opening party at Grand Central Hall headlined by dreamy rockers Warpaint, supported by locals All We Are. Warpaint who have just released their third studio album Heads Up to critical acclaim will be returning to Liverpool Music Week after masking their UK debut back at the 2011 event.

The following night, 27th October, at the Arts Club, the festival continues when ’90s alternative rock legends Dinosaur Jr. occupy the venue supporting their 11th album Give A Glimpse Of What Yer Not allowing Liverpool to get a rare look at the famed three-piece.

Dinosaur Jr. are bound to preform material from their latest release and some of their best known hits. This will surely be an unmissable gig on LMW.

The 28th October sees the biggest concert of the event week and a highlight of the year when “The Master of Horror” John Carpenter brings his soundtracks to life at the Liverpool Olympia.

The legendary filmmaker is known for his wonderfully unique and innovative synth soundtracks for films such as Halloween, Big Trouble In Little China, Assault on Precinct 13 of which we’re sure he’ll play portions of each along with material from his excellent two recent albums Lost Themes and Lost Themes II.

The Liverpool four-piece recently signed to Babe Magnet Records (and Polydor) and will sure be celebrating with this show.

2016 has been fantastic for Liverpool‘s own She Drew The Gun, after several solo shows, a UK tour and even a well-deserved Glastonbury stop to good reviews and even an acclaimed album release (that we reviewed here), She Drew The Gun are ready to return to the LEAF on October 30th.

She Drew The Gun‘s debut album Memories of The Future “successfully captures a new image for listeners, one that the band seems to be made of” and their live performances hold their image tightly with recent good slots including their psych-tinged Skeleton Coast and 50 Years of Revolver sets.

On Halloween night (31st October), rock n’ roller Louis Berry takes to the LEAF stage following She Drew The Gun the night before to bring one of his well-known explosive sets to Liverpool Music Week.

Liverpool standout Berry who is known for his truthful lyrics, soulful voice and raw power will be a highlight of the week, which is an obvious line when talking about Louis Berry.

The brave Manchester jazz trio take to the Arts Club on November 1st with their exciting sound that clashes the standards of jazz and the modern electronica boundaries has been well-received from critics and even gained the trio a Mercury Album of The Year Prize nominee.

The trio have played all over the world including sets at major jazz festivals such as Montereux, Winter Jazzfest among others which have quickly gained them an-in within the prestigious and oftentimes pretentious world of modern jazz. The Wall Street Journal called them last year “experimentalists in pursuit of superior improvisational music”.

On the penultimate night of Liverpool Music Week, the alt-pop experimental music duo Cat’s Eyes will take to the LEAF stage with a widely anticipated set. Formed by Liverpool Psych Fest headliners The Horrors‘ frontman Faris Badwan and Italian multi-instrumentalist Rachel Zaffria over a love of 60s acts like The Ronettes, the group overall went into a strange and often untraveled path bringing all sorts of cinematic and orchestral values into their material with swirls of influence by the likes of the great Ennio Morricone, romantic Disney scores and even old-school surf rock acts to form a sound like no other.

Now supporting their latest release Treasure House, the duo will be bringing everything in their bags of tricks to the LEAF and will surely leave the city in awe.

Along with these gigs, across a few venues on November 4th we’ll see the official ending party of Liverpool Music Week 2016. While right now, everything is being kept quiet about the final night, we’re very sure following this wide and amazing line-up that it will be a blast.

That’s not all, throughout the week LMW will be teaming with DIY Magazine to present another set of Breaking Out shows. These shows feature acts that will surley be on everybody’s radar in the next year or so, so make sure you catch them in intimate spots early. While the LMW Wristband is £50, that doesn’t include these shows. These will be a steal at £4 entry at each event.