On a dark Friday night, the electronic pioneer Gary Numan stepped into the beautiful surroundings of the Liverpool Olympia to show the biggest audience he’s had in the city in years, exactly who he is, one of the greats.

The lights blackout, the crowd of older Numan lovers erupt with cheers, claps and the classic “Numan“ chant. The stage lights flicker on and travel along the the walls of the Olympia, as “Replicas” starts to play. It’s euphoric, that moment that the legend steps onto the stage to preform his old material, something he has verbally announced his distaste for over the last few years, we’re in for a treat. 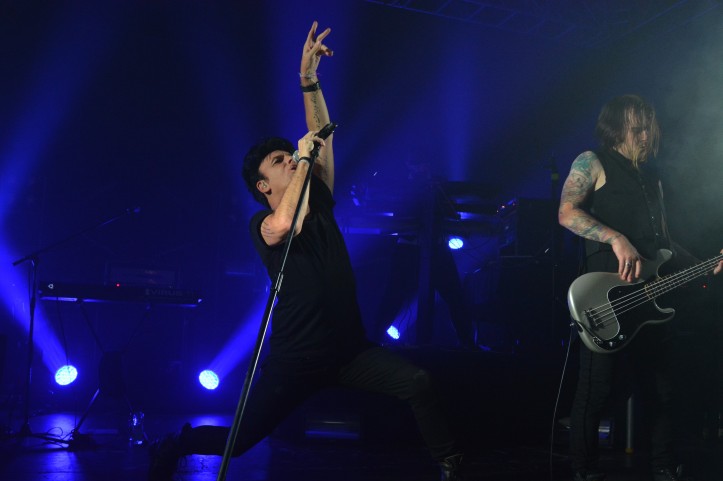 Just as the intro fades away, Gary steps into the light to bring us one of his greats, “Metal”. Over the last few years, Gary has seen a large influx in his relevance, as pushed by the modern music industry which he loves and artists who claim heavy influence from Numan, such as Trent Reznor (Nine Inch Nails), Dave Grohl and many electronic artists.

The sound that Numan has been channelling over the last few years is a more industrial to the channel of the aforementioned influenced NIN. It works, very well. Numan has reinvented himself to stick with modern times, crafting a perfect balance between his iconic synth work and heavy industrial rock.

“Me! I Disconnect From You” was another blast, showcasing Numan‘s evident power. A few songs later, Numan is in his strive, pulling out classics and deep cuts seemingly from his bag of tricks. He performs “M.E”, a song which the night before in Sheffield was stopped by a fire alarm, and the crowd ate it up.

The Numanoid audience bathed in the glow of the stage as their icon proved who he was, a still relevant legend, which is a rare sight. Even if you weren’t a Numanoid, you could still see the power and energy around the gigantic and often oddly intimate Olympia.

After the foursome of “This Wreckage”, “Observer”, “I’m An Agent” and the great “Down In The Park”, Numan show no signs of slowing down. Their performance is being filmed, which could’ve motivated them to show off their abilities as performers.

After just three more songs, the audience is treated to Numan‘s biggest hits back-to-back, the thousands sign every word. Firstly, the thumping heavy “Are Friends Electric?” left the audience and myself in a state of awe.

While the audience was picking up their jaws after an amazing, loud channelling of the Tubeway Army hit, Numan hits us with the opener synth of his groundbreaker, it takes its time and we wait for those drums blasting us into “Cars”. It’s jubilant.

After hitting us with those two, Numan ends his set with “I Die: You Die”. There’s an odd feeling in the air, it’s not like his performance of the song, or the song itself aren’t good, it’s the simple fact of following up the “Are Friends Electric?”/“Cars” duo to end the show. Everybody was worn out after those two.

Collectively, the Numanoids wait after their leader leaves in the darkness. Chants of “Numan” extend through the air. He returns, his encore consists of the odd Tubeway Army song “Every Day I Die”, and the striking “My Shadow In Vain”.

For a career spanning 39 years and a recent revival period of his career, Gary Numan proved that he’s still one of the most unique, one-of-a-kind musicians and live, is something to behold.